My Mask Essay
The agents of socialization are at from a very young age shaping how one fits into a family structure, a peer group, and a community.  They shape your values, morals, ideals and sense of self. These agents include, but are not limited to, the influences of family, friends, the school system, religion and media. My early socialization from my family was fairly contrary to mainstream American ideals.  For example, I was raised atheist, vegetarian, socialist and mostly against wasteful consumerism. While these traits seemed very normal to me, as I entered school, I discovered just how different my values and beliefs were from most of my peers and teachers.

Once I entered school, I began to be socialized to feel pressure to try to conform to a societal norm of behavior that is not instinctual for me.  When I was in third grade, school personnel began pulling me from classes and having me take strange diagnostic tests. I didn’t understand why but I knew that I did not like it.  They were testing me for an autism diagnosis, they were testing my language comprehension abilities, and they were testing my speech. I began to feel different than my peers and fear that something was wrong with me.  While these diagnostic tests returned as “normal” (whatever that means), I began to feel like I was different, and made to feel that that was a negative. Now, rather than having increased empathy for people with cognitive differences, I can be quick to judge. I think this is because I was socialized to want to separate myself from people with these diagnoses, probably because I fear being labelled with this diagnosis through association.

I was always a bit different. I would act in a way that was not particularly normal for people my age. I had various repetitive tics; I paced throughout every recess. The school I was at was unwilling to accept that my behavior was just a product of me being a somewhat immature, quirky 3rd grader. They decided it must be some sort of autism. While the autism testing dispelled the belief that something was “wrong” with me, my self-image was somewhat fragile, and I knew my peers viewed me as an outsider. I blamed my ostracization on being pulled out of class (in front of my peers) for testing, for “rock brain” counseling and for speech therapy. I was happy to know I was still a normal kid who just happens to be a bit immature and strange, but this feeling of “otherness” would stick with me for a while, as other kids still thought I had something wrong with me for the rest of 3rd grade. This shaped me by making people view and treat me as a different person, and because of this I was not very social with people.

I used to be absolutely obsessed with reading. I would finish my school work as quickly as possible so that I could crack open my novel. The fantasy world of Rick Riordan was much more exciting that the banal classrooms of my elementary school.  This obsession would continue at home.  I would hide books under my pillow, and when my parents fell asleep, I could flip on the light and spend the night reading my books. My teacher decided that this also was abnormal, detrimental behavior. A meeting was called with my parents to discuss how I did not engage with my classmates, and spent most of my day reading. My teacher stated a goal that I “read less”, which my family did not agree to.

I think these experiences that I have gone through relate to socialization. I was not the “typical boy”. I was not rough and tumble. I did not have interest in sports. I wanted to read and pretty much stick to myself, so I was singled out as different and inappropriate. In reality, I just wasn’t conforming to societal expectations of what a boy was supposed to act like. In the words of David Sedaris from novel, Me Talk Pretty One Day, “I had no interest in football or basketball but had learned it was best to pretend otherwise. If a boy didn’t care for barbecued chicken or potato chips, people would accept it as a matter of personal taste, saying, ‘Oh well, I guess it takes all kinds.’ You could turn up your nose at the president or Coke or even God, but there were names for boys who didn’t like sports.”  The difference was, I  hadn’t learned to pretend otherwise, and I did not want to pretend to be someone I wasn’t.

Overcoming my feelings of otherness and isolation turned out to happen pretty quickly. I decided to keep my head up and not be held down by this sense of difference. I made a lot of actual friends in 4th grade because I found other kids that had interestests that were out of the mainstream. I also became friends with someone who I still have a very strong bond with. I was in a pretty bad spot at the end of 3rd grade, I was doing weird things like just reading during class and not talking to people. I broke those habits after meeting people and realizing how much I had been secluding myself previously. I realised why the school thought I had autism earlier, and began to change myself to a more socially appropriate person. I was shaped very well by both my parents and my friends to be more normal, sociable and friendly than I was. Still, I will avoid interaction with people if they make me feel different or unwanted. This was one of the most important times in building the current me.

I feel like these relatively early experiences were important in building the current me. Both my strange behaviour and my successful attempts to change my behaviour were very crucial. I learned from a young age what it felt like to be marked as different, but I also learned how to change myself and improve. Avoiding the other strange people is now something that I aim to do. I was able to realize my strange behaviour and correct it. This lead to me being much more accepted and liked by my peers. Currently I am much better off than I was, and I would not have made it if it weren't for the people who were willing to help me. Unwillingness to talk to people who are in the same situation for fear of falling back into it is also a side effect of what happened. It is very hard to risk getting the same label. I am still scared of receiving the same label as last time.

My parents were the main people that helped me fit in and kill off my strange behaviour. They asked the school to leave me alone, and they were constantly trying to teach me what to do. Unwillingness to accept I had a cognitive difference, and fighting to make the school not give me special treatment really helped me. Because they never accepted that I truly had these problems, they pushed me to become a better version of me. I received support from them when no one else would help me, and they were still helpful when I had moved on to learning from peers. They allowed me to go to friends houses and were very chill about things, so I did not end up overprotected and vulnerable.

My socialization story has been one of temporary isolation followed by social success. I had some initial social trouble because of suspected autism in 3rd grade. I was able to rebound quickly but it left a lasting mark on me. I have scorn for people who went through the same thing and failed to escape. I was singled out early, and was affected by people's responses to me.

​
Project Reflection
The mask project was based around socialization, which is the study of how people learn how to act within their society. I picked a song and talked about what it meant to me as the start. We watched videos about feral children, kids who grew up without human interaction, we took notes on the agents of socialization. There were lots of videos talking about how people are socialized, and what they were socialized to do. Our task for the project was to write a mask essay about how you were socialized, and to make a mask that showed how we were socialized. The mask were made on our face with plaster, and I painted and glued things to mine until it showed how I was socialized.

Throughout the project, I was responsible while Stephen was around. I would do my work on time and well, but I slacked off when Jared was around. I was not very into improving the poor mask I had, and it took until winter break for me to make a new one. However, I made my mask essay long and included lots of extra insight. I didn’t advocate much during the project because I never really had a project question or needed help. I was able to make it through the project without struggling much, so I didn't ask the teacher many questions. I preserved well during the project; I kept painting my mask and working on it even when it felt pretty done. I made my mask essay better than I needed to, and added outside sources to it after reading them. I feel lots of pride in my essay because it was very well refined and above the standard. I feel pretty neutral about my mask. Its competent but not super above average or overreaching.

This project didn’t really change me too much as a person. I was already a good time budgeter and worker, and I did well with other people. The things I learned didn’t really change my life a ton and I feel like im pretty much the same as I was at the start of the year. None of my Habits of Heart and Mind have improved, or the PAPER acts. I am much the same learned and person as before. I grew little because I already had what it took to do the project. 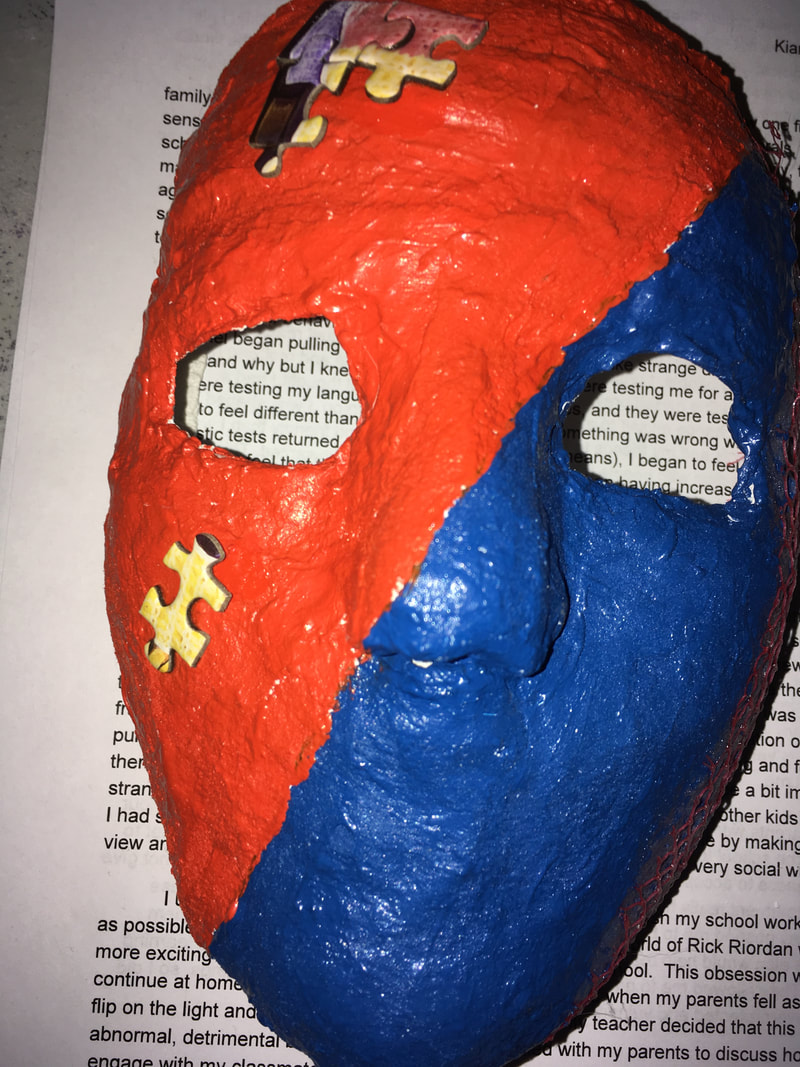