The project started when we walked to Twin Buttes to inspect their sustainable systems. On the way to the farm I was contemplating how hard it would be to build an aquaponics system for the school. I felt like the project would be an entertaining foray into both sustainability and constructing useful structures. This would turn out to be partially true.

My biggest takeaway from the speakers was that sustainability is about a closed loop. The speaker at Fort Lewis College had us do an exercise on closed loop systems using markers. The markers were used to represent resources. The first time around the markers got wasted because they were just discarded at the end, and the system broke. But, when we looped them around, the system worked forever.  I learned that a truly sustainable system takes all products and recycles them, resulting in a system that uses all of its waste to restart itself or help another system. I also learned that sustainability is crucial to the world's future.

Sustainable design is when you design and build an object with the purpose of it having no negative impact on the environment. A sustainable system can run forever with all waste products either getting biodegraded or reused in the system. The goal of sustainable design is to build these systems and keep them working even when things may break down or stop working. Designing sustainable systems is going to be one of the most important jobs in the near future, as natural resources become more scarce.

To build this prototype, we went through multiple steps. The first was empathy interviews. Garrett and I interviewed Ethan Holst on his experience in the school and what he thought we could build to help him learn at school. Next, we interviewed Sam Larsen. Sam expressed that he enjoys working outside but that it is often too hot to stay out for long.  Using these interviews we started to move on and reflect on what they told us. The insights provided by Ethan and Sam lined up with a common theme of other Animas students: the need for quiet, outdoor work spaces.

Next, I ideated with my group to come up with ideas for how to address the lack of outside work areas. We wrote about 30 ideas down on sticky notes with the goal of creating a working idea for how to allow for more outside work space, and eventually, we settled on building a small gazebo outside. We went through multiple big ideas before arriving at the conclusion that shade was crucial to working outside. From there we moved onto a specific gazebo design. However, after seeing the cost was exorbitant, we decided that a more realistic goal was to put up a shade sail. The shade sail is currently hanging up outside as our completed final prototype.

To put up the shade sail we went through multiple steps, including sewing up its holes and hanging it up. When we first received the donated sail,it had 2 small tears. Milo and I sewed them up before hanging it from the poles using p-cord to get the measurements for the wire. Using the angle grinder, we cut the steel cable into the appropriate lengths and used the cable to string the tarp up from the poles. I held the ladder and passed materials up to Milo during this part, as well as hooking the cable in with the carabiners. After the sail was hung up, we moved a pair of tables underneath it to create shade covered sitting areas outside. 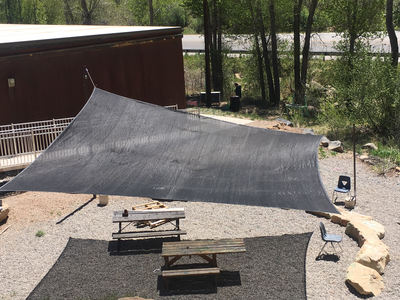 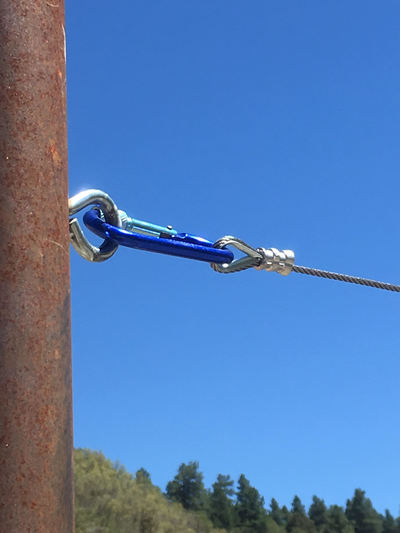 This project taught me the most about adaptability because our original idea had to be replaced. The first idea we exhibited, a gazebo, would cost around $5000 to make. We had nowhere near enough money to afford this, so we adapted and created a new idea and built a shade sail. My adaptability was very strong because I was able to come up with a new idea and execute it quickly. This was a great growth because the rube project went much more according to plan so there was not too much adaptability involved.

I still need to make progress in curiosity because I didn’t reach out too much. During the project I could be somewhat shut off to new ideas and I would occasionally shut down a new idea without giving it an adequate chance. This led to our group’s idea staying very similar to the original, achievable, but simple. By growing more willing to change the project, I will be able to create more unique and impactful work.

The biggest challenge we suffered from was how expensive shade sails are. A shade sail of the size we needed cost $150, and we didn’t have that much money. We created a gofundme to raise money, and later got a donated shade sail with small holes. We solved this problem by raising money and later we used that money to purchase the clamps we used to hold the steel cable. I personally helped to refine the gofundme, as well as spread it around, and later I sewed the donated sail’s holes.

The problem we were unable to solve was simple: our original idea was far too expensive to be created. After rough calculations we needed around 5 thousand dollars to create our gazebo. We had nowhere near enough money to afford this, and as such we had to change up our project. We eventually switched over to putting up a shade sail over the amphitheater, which ended up successful. This last minute change allowed us to move forward and create something at the very least. By solving this problem quickly we were able to save the project.

Success in this project changed many times throughout its course. During the start of the project we thought we would be successful if our entire gazebo had been built and was functional. By the end, success was hanging up the shade sail from the steel cable. Our goals changed this much because we shifted ideas a few times. We vastly overestimated how much time and money we had, and underestimated the cost, leading to a huge change in our goal. Eventually we brought our goal back down to earth and made it achievable in both time and money.

My advice to students who do this project next year is to keep it reasonable. Things cost lots of money, and time runs quick. We had trouble with our money, and many other groups ran out of time. I would advise new students to keep in mind their constraints, and to choose smaller, yet still impactful projects to improve our campus. Doing so would help them to keep down stress and feeling of being overwhelmed.